"This is why many people think economics is BS"

econjobrumors.com is a website on which economists (and academics in related disciplines) share and discuss job offers, conferences, academic journals and so on. Contrary to what you might think, it is often funny to read and politically incorrect, probably thanks to the fact that posts are anonymous. While browsing the website, I stumbled upon a post that shed light on an issue every economist is faced with: many people think economics is just bullshit. Even though I don't even call myself an economist, finance is a related discipline, and so I still feel the heat sometimes. This is why I want to share with you the post I mentioned. The discussion was about Krugman's prediction that the election of Trump would have wrecked the american economy to the point it would have never recovered:

If the question is when markets will recover, a first-pass answer is never. [...] So we are very probably looking at a global recession, with no end in sight.

Krugman's article didn't exactly age well: the markets have been breaking record after record, the unemployment rate is at a near-record low, and the american economy overall is just booming. And this came from a Nobel prize winner economist! So let's get at the post of our anonymous friend on the discussion I mentioned:


This is funny. But we should also be angry. All those people who think economics is BS voodoo science think that way because dbags like Krugman go on TV/in the press and make claims they can't possibly back-up with sound economics.
The only practical way your average layman has to evaluate the success of economics is that they saw idiots like Kruggles in the NYT saying "markets will never recover" (which any actual economist can immediately see is nonsense).
It's fine for Krugman who already has his phat Nobel money, his sweet speaking gigs, and his cushy NYT column. But for those of us who depend on public funding to do actual research, and on attracting students to the study of economics to maintain the viability of our departments, people like Krugman are public enemy number 1.

This pretty much nails it. Economics is a social science, and as such it will never be as rigorous as natural sciences. But this is not the main problem. The main problem is that it is a discipline with political implications, and too many of the big guys in the field seem to abandon objectivity to push political positions. Krugman is probably an extreme case (I also think his Nobel prize was the most undeserved ever, but that's another story), but he's certainly not alone. While economics does not and probably never will have the rigorousness of natural sciences, it is also not BS as many people think. And while it's true that economists disagree, serious economists do not disagree as much as the general public thinks. There is a vast body of knowledge on which the discipline lies that is pretty much well established.

Finally, one thing that will never be pointed out often enough: the job of economists is not to make predictions. They do make predictions sometimes, but that's not what the discipline is about. Ideally, an economist is like a doctor, with the difference that the patient is not a person, but an economic system, or a part of it. Like a doctor, he tries to tell what's good and what's bad for the economy, he tries to find out what's wrong when something does not work properly, and how to fix it. Every doctor will tell you that smoking is bad for you, and that's true. However, there are people who smoke for decades and stay healthy until the age of 90, and people who never smoked that die of cancer at the age of 40. That does not invalidate the statement that smoking is bad for you. Other questions are more open and doctors disagree, like about the health consequences of eating red meat. While medicine is more rigorous than economics, they are similar in this regard. This is the correct way to look at economics as a discipline.
at January 21, 2020

Email ThisBlogThis!Share to TwitterShare to FacebookShare to Pinterest
Labels: economics

An Introduction to Stock Investing with R: Second Edition

The second edition of my book is ready. It is available on the Kindle Store at the same price of the first edition . I thoroughly revis... 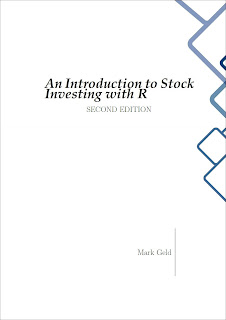